There are a number of different ways of making a rope, from traditional stranded ropes that were used by early Egyptian civilisations, through to modern “kernmantle” (core/cover) constructions that have become increasingly more complex and technical.

How is Marlow’s Ropes made?

Marlow Ropes has been making rope in Hailsham for over 200 years and has a world renowned reputation for quality and innovation. This film shows a ‘behind the scenes’ view of how we make our high performance rope which supplies the Leisure Marine, Rope Access, Defence, Arboriculture and Industrial markets. 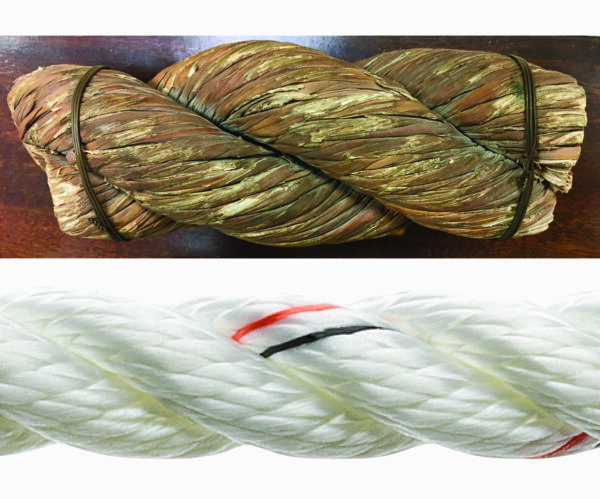 3 strand – Traditional stranded rope construction. Ropes have been made in 3 strand form for thousands of years, by hand, on rope walks and today on modern compound rope machines. 4 strand ropes can also be made in the same manner and are common in continental Europe.

The image on the right shows a short length of rope belonging to Marlow that was excavated in 1942 from the Tura caves on the banks of the river Nile. It was part of a length of rope wrapped around a large block identical in size and shape to those used in the building of the pyramids of Giza. However, this piece of rope has been carbon-dated to 300 – 500 BC.

The remarkable feature of this rope is that the papyrus or Nile reeds are formed into a strand and the 3 strands are made up and laid with opposing twists (S & Z) – exactly the same principles that are employed today. 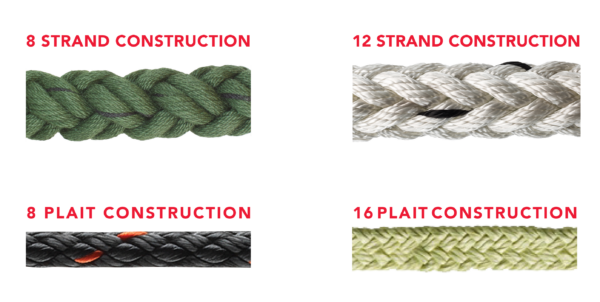 12 strand – this construction gives a rounder and smoother form than 8 strand. Has a smaller internal void than ropes with more plaits. This is the ideal construction for rope cores and high strength braids, it’s also very easily spliced. Examples include D12, T12, V12, PS12 etc

8 plait – (made on a 16 carrier machine) this construction produces a thick knobbly braid. Examples include 8 plait standard, 8 plait pre-stretch (with a small core) and some single braid aramids.

16 plait – like 12 strand but has a larger internal void. If used with no core this allows the rope to flatten more in use. Examples include D16 lash line and some single braid aramids. 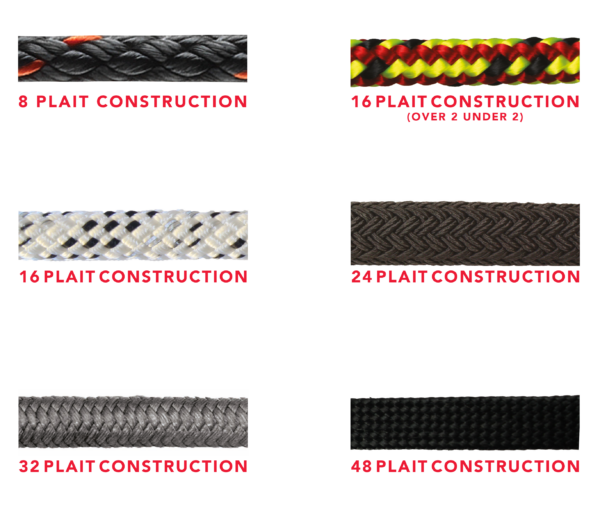 8 plait – produces a knobbly cover, normally quite a thick cover so small core. Examples include excel matrix and 8 plait pre-stretch.

16 plait over 2 under 2 –made on same machine type as 8 plait, gives a smoother cover with more space for core, suits smaller core dependent ropes such as Excel Pro, Excel Racing, Fusion etc In larger sizes this construction can give a firm round rope with a small core such as Gecko arborist ropes .

24 plait – This construction gives a good balance between a thick durable cover whilst retaining space for core. Can be used in both core dependant and balanced rope designs. Spliceability is typically good. Examples include D2 and doublebraid.

16 plait – Similar to 24 plait, can make thinner cover though if required. Examples include D2 club, marlowbraid and Static LSK.

32 plait – Can be made with a thinner cover than 24 plait allowing bigger/stronger core. Harder to splice in this form though. Thin cover doesn’t always work well in deck hardware. Examples include Dynaline defender and Prostatic..