CLIPPER RACE 6: Living on The Edge

Neptune arrived as promised on 1st February. Crossing the equator about 21:00 local time on 31/1/20 (11:00 in UK) it was no time for the Trial of the Pollywogs. So at a watch change over in light winds, the Pollywogs assembled before Neptune and the Court of His Loyal Shellbacks. While many fine offerings were made in interpretive dance, poems, limericks and recitations, the guilty were duly punished, absolved of their heinous crimes against the Sea (including peeing in it!) and anointed Shellbacks.

Currently, we‚Äôre living on the edge; no not a link to Aerosmith nor to U2. With every wind shift our sail plan is reviewed. Windseeker hoist and drops in only a few minutes as the weather is governed more by passing clouds than the low pressure to the North-West. That‚Äôs not to say the low pressure isn‚Äôt terribly disruptive of the race though. The steady North-East trade winds are replaced by Westerlies.

We are pacing other boats daily, trying to keep them behind us, with our places swapping from time to time as we look for the best wind and the best tactics. As I type it is nip and tuck with Qingdao. No doubt exciting on the Race Viewer but even more edge-of-the-seat for us. Trying to make every change as slick as possible. Our Code 3 Spinnaker is up, partly to assess some recent adjustments following the Airlie Beach repair, partly to get us all back in the groove of flying our Kite, day and night. Watching the luff at night is a challenge, the edge of darkness. 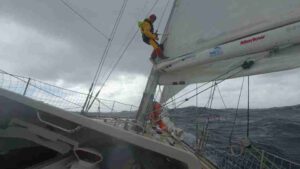 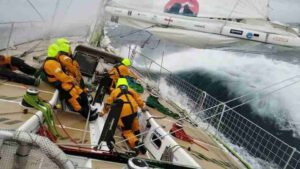 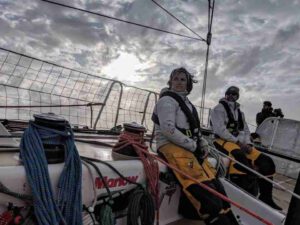 We are going well and if we can get a bit more North in our course, we will overtake the South Western part of the fleet who appear to be caught up in a bit of a windhole or lull. Fingers crossed for us. Two weeks in and about halfway there. With the trade winds in the second half will hopefully be quicker or it will be a very short stop over, wherever it will be.

Nights are currently very special with the Southern Cross the right way up, and the Plough rising in the North, we can see both celestial poles. A few crewmates have had their curiosity piqued and will be looking up at night a little more often when they get home.

On a personal note, today has been great ‚Äì despite a complete lack of birdlife for the last week which has surprised us all; a White Tailed Tropicbird came and flew around our mast head and either returned a few hours later for an encore for the other watch or sent a friend. I have a full set! Perhaps a little more variety as we head West. Not everything that turns up is a bird thought. We had a stunning butterfly arrive, which seemed to like me a lot. Every day is different, and we are all making the most of each one as they come rather than counting down to the finishes, it‚Äôs an awfully big adventure.