Apollo dips to the horizon, a shimmer and disappears. I descend the mast and reach the deck just as the golden chariot rushes beneath the earth to prepare for a new dawn.

The evening deck walk had found a spinnaker halyard caught on the top spreader. Should be fun up a mast at 10 knots with a Code 1 Spinnaker flying. Skipper at the helm, four people on the grinders. Up on the Staysail halyards, clipping past the occasional bungee. Rolling only a little in a calm sea state, it‚Äôs quite a view. Quickly fixed the tangle on the spreader, remove a few stray bits of broken bungee and re-attach the reefing downhaul on the second cringle. A successful trip and managed not to need the knife. Bowlines are great to untie!

In our light wind progress North practicing a few decorative knots I thought of the useful (on much smaller boats!!) Jury Mast Head knot. Three loops to tie to the top of a temporary mast or stump to give attachment points for forestay and shrouds. Easily turned into quite a pretty and slightly unusual mat. Form 3 bights, overlap so they interlock. Take the two middle parts, cross over each other and thread out to the outside of the bights. These are the side bights for the shrouds, the centre bight for the forestay. Mast up the middle and pull ends tight. Voila. For a mat lead one of the ends round in the direction it is travelling and feed through the middle in the usual under the unders, over the overs way. Follow round and a mat appears. 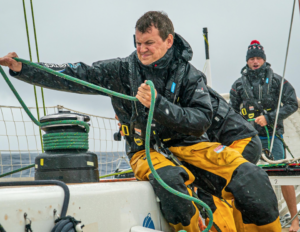 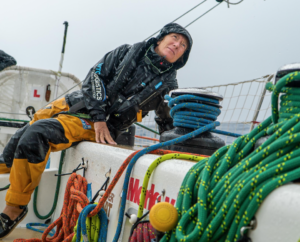 Never thought I‚Äôd be doing software and algorithms, but my automated tracking spreadsheet is now working really well and supporting the decision making for our sailing. Result! Just the million and one tweaks to go.

Lots of time ahead in Subic Bay to prepare for. Of course, it will be easier as we now know the area. We have had effectively a mini-circumnavigation race, start and finish in one place. Looking ahead, it will be nice to make new friends on the next leg on our boat and other teams too. As well as keeping in touch with familiar faces, Round the Worlders.

CLIPPER RACE 6: Living on The Edge