It does not get any better than this. What a perfect way to conclude the best leg so far in this round the world sailing journey.

The final week of this 3rd race on the Australian coast proved more challenging than ever as the fleet battled the strong current and variable wind conditions.

In addition, we were hit by a front that left some boat in pretty bad conditions, Qingdao being hit by lightning and GB being knocked down for over an hour. On Visit Seattle, we managed to see it coming and drop our headsail only seconds before the front hit us. This anticipation helped us gain on our pursuit of Liverpool and Sanya.

We were head to head with PSP, Liverpool and Sanya as we entered the straight in front of the great barrier reef. With great tactic from Nikki and an amazing execution by the team, we managed to pull away and for once keep the lead until the end.

We were greeted to Airlie Beach by a chopper going around us many times and by all the crew supporters and staff. The victory was ours and it FELT AMAZING.

It’s funny because I had always thought that to win you must work harder than the others and that when we would win I would be exhausted. However, this race made me realise that there is so much more to sailing, including tactics but also patience. You can’t force your way up. You just have to make the best out of every situation, limit the errors and hope for some luck. It’s an error’s game and the team that does the least usually wins.

Arriving first has its benefits as the dock is closest to the showers and the bars and restaurants. Three things we always look forward on our arrival. 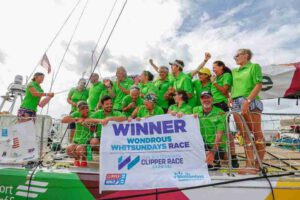 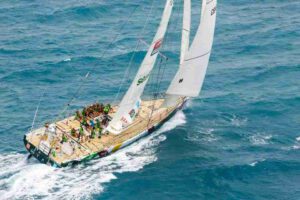 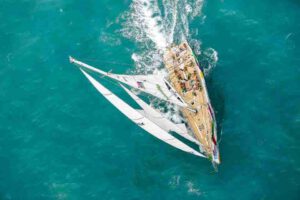 There are no better place to win a race as the community and staff in Airlie Beach treated us like royalties on our arrival and during the ceremonies. We really hope to make the most out of this stopover because Airlie Beach and the Whitsundays are absolutely stunning and offers so many cool activities like skydiving, jetskying, oceanrafting, diving, snorkeling!

Before I started I had mentioned that the All-Australian Leg (Leg 4) was the one I was looking for the most and it has not disappointed me. We got our first podium and first win and we took part in the iconic Sydney to Hobart Yacht Race with 100 other sailboats. We also have seen so much; wildlife, luminous night skies with shooting stars, we’ve seen lightning storms, hot weather, cold weather, rain. It has definitely been the highlight of my race so far.

This marks the halfway mark of the race, which in itself is unbelievable. I can’t believe it has already been 5 months since we left Liverpool. Our team Visit Seattle, is now in 3rd place overall and everyone knows we will be competing until the end. I feel we have the team to win and continue to make our way up the leaderboard, but it will be a tough battle, but it all starts with the belief we can achieve it.

Marlow onboard the Clipper Race: Hoisting the Jib

CLIPPER RACE BLOG 10: ‘One of The Best Experiences I Have Had Since Liverpool‚Äô By Simon Du Bois