Hope all is good on your side. Today I want to talk to you about one of the great thing that comes with the Clipper Race which is learning and discovering different cultures.

But first, I wanted to let you know that I am doing all good and my ankle is OK. As soon as we arrived in Qingdao, the Clipper Race had organized everything for me and I was taken care of. Little visit to the hospital to get an X-ray and as expected no damages to the structure of the foot! Took a few more days for the pain to go away and for the flexibility to start coming back.

One of the first differences we noticed coming into China is the difference is applied rules and regulations on the water and the large amount of fishing vessels. We had to dodge a few on the final hours before the finish line of the previous race and another one just 100m from the finish line which had no lights and just appeared meters away from us forcing us to do a 360 to avoid collision. Imagine a collision 100m from the line… Sadly, our finishing position made us miss the welcome party for the first 3 boats but looking at the videos the following days, it looked like it was pretty awesome. I mean, there was dragons, dancers, drums and music. Chinese people do know how to create an experience that’s for sure. We were able to live this through the different ceremonies during the week and upon departure for race 2 of the Chinese leg. Apparently, the Qingdao arrival is even more grandiose so we added this to our motivation pack for good result in this race.

Next, was my visit to the hospital which brought me in the center of the city. No better ways to taste the culture then riding a bus downtown. My first surprise was to hear people sniffing and spitting IN THE BUS!!! At least they had the decency to do it into small garbages onboard. It was also funny to see 3, 4 and sometimes 5 people riding on the same scooter. Scooters for which road rules don’t seem to apply at all. At our arrival to the hospital it was a bit chaotic people coming and going everywhere. The Clipper Race had arranged a translator for us (thank god) so we manage to get in touch with our relation to the hospital. It started slowly until a new woman took over our file. After running us through the hospital form departments to departments (X-rays, blood tests, etc.) and skipping all the lines we learned that she was the wife of one of the doctors. She clearly knew her ways around, pushing through people and making us cut any lines. It was also very funny to see that even when we were being assessed by the doctor in his office, people would simply walk in with papers (results or prescription) and interrupting the session and starting to talk. There was absolutely no sense of privacy or organization. Good thing we weren’t being assessed for something more “personal” if you know what I mean.

The rest of our time in Sanya was fabulous. Great venue, great atmosphere. The food was outstanding and I must say despite not having a clue of what people were saying to us, it was quite easy to get around and people were really open and ready to help us. Thanks to Google Translate app. 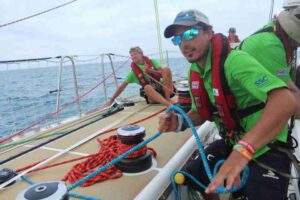 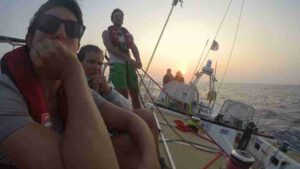 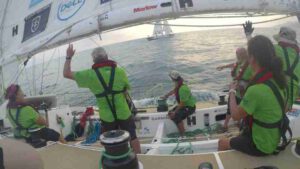 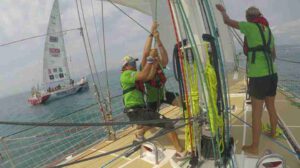 Then, came time to set sail again. Next destination: Qingdao! Leg 5, Race 8 is known to be very, very demanding on the crews with high currents, upwind sailing and temperatures falling down as we are heading north. Well this one was not an exception. The start definitely set up the paste for the race. We came only inches (I really mean mm) away from ripping off Nasdaq stern pulpit on the start line as they were having trouble standing clear of Dare To Lead on their leeward while we were hearing Sanya Serenity Coast shouting at Garmin behind to stand clear forcing them and Liverpool 2018 to do 360 turns after missing or touching the mark. After 1 day of smooth sailing and after avoiding a couple of fishing boat and nets at the start, the conditions picked up fast. The sea state became very rough with 4-5 meter waves and heading upwind. It was simply a beating. The life at 45 degrees is definitely not a luxurious life. It is so physically demanding to move around the boat and stay safe. I am not gonna lie, the most dangerous thing about it is going to the toilet. Knee pads and helmets are recommended as you crash from side to side on the walls to the movement of the waves crashing. We managed the rough weather pretty well to get back to the front of the fleet chasing PSP Logistics who has been leading the pack since the start. The guys are sailing so well, it’s incredible. Luckily for us the temperatures have not dropped so much yet so it was a bit more bearable. Yesterday as Jerome was doing a repair on our mast track during sunrise and I was on the helm, I remember thinking: “Is this the first time we see clear sky and sun in 3 days?” The nights had been so demanding, with no stars, no moon, lots of clouds, no sight of the horizon and the boat crashing through the waves one after the other. It really felt like we hadn’t seen the light in days.

Such conditions are very demanding on the body, especially with smaller crew. I believe most teams have less crews than prior legs and it definitely has an impact. As the wind dropped to more normal conditions, it was my turn to take on the cooking duties yesterday. For the 3rd race in a row I landed on the Mushroom risotto for dinner. Quite funny considering I don’t like mushrooms. People keep telling me it’s a sign and making fun of me for it. I was pretty happy (and lucky) with the conditions as I could carry on my cooking duties without too much trouble. It allowed me to use some creativity and expand the menu. For breakfast, cereal and toast are the easy way to go. For lunch, the menu was set to tuna wraps but after noting some veggies were going to turn bad shortly with decided to use the cabbage and carrots and make a cabbage salad, topped off with some dried fruits and some nuts. We also had some tomatoes that needed to be eaten and I could not see how to incorporate them into the salad, they were a bit too juicy. I decided to do a salsa and use some of our snack crackers to serve it as an appetizer. I say that it all humility but I think the apprentice as surpassed the master here. My salsa was even better than my mom’s. To finish feeding those hungry animals I served some egg wraps. For dessert (yeah, we can say we served a 4 course meal on a racing yacht – BOOM!), Chrissie, one of our crew, had bought some super weird dried fruits from a market in Sanya. After some experimenting, she concluded she would bring out her personal stash of Skittles to share with us because I don’t think any of us ate a whole bite. It was quite the “experiment”. Hahaha.

We are now in probably the most decisive portion of the race with some much at stake and the fleet has just compressed with the light winds. We spent hours analyzing our options, making Excel files with scenarios on the points we would gain going to the Scoring Gate, while possibly losing on our final ranking and then considering the impact of Sanya’s ranking on the overall picture of the race as they played their joker for this race. There is a lot at stake and I must say, this is exactly why I am here. The sailing racing. I LOVE IT! The analytical brain in me just fires up and I that is when I am at my best. It also looks like it will be downwind until the end of the race which will make life onboard much easier.

A new game is starting. It’s called ‘Dodging the Fishing Vessels’. I can’t even count them on our AIS screen, there are so many. We have someone permanently in the nav station to make sure we stay clear of them. Every 5 minutes, we need to update our course and analyse whether we have enough room in between those fishing boats and I don’t see the trend ending anytime soon. It will be a tough finish for the race. 3-4 days to go and we are fitting for a podium finish.

CLIPPER RACE BLOG 12: When The Going Gets Tough, The Tough Get Going!