Well that’s what they call it. Probably because that’s the biggest part of the leg but it seems that everyone’s focus was on that later part rather than the first part: getting out of the Asian sea.

The Le Mans start was delayed 18hrs due to terrible visibility and high density of fishing vessels nearby. The race committee decided it was safer to let the boat motor overnight to start the race the next day. To give you an idea of the density of the fog. When at the helm or stern of the boat you could barely see the bow of the boat. It would have been quite complicated to setup for a Le Mans start in those conditions.

The first week was a game of snakes and ladders with wind holes like we had not seen before, fishing boats EVERWHERE with even more fishing nets floating. It seems like we got lucky. We “only” got caught in one net which required 1hr of work to get free of and we were 2min away from having me dive under the boat to free us up. Some other Clipper Race yachts were not as lucky according to the blogs with one having to get their fenders out as they were being dragged towards the fishing boat. It was literally a fishing nightmare.

In addition, with the fishing nets we had to deal with significant kelp or algae’s floating everywhere. The problem with those is that they get caught on the rudders and have the potential to slow the boat down significantly. After trying different techniques, we came to the conclusion that the best way to get rid of it was to lean over the side of the boat with a boathook while a teammate would hold our feet. Quite monkeyish. Nothing I dislike though.

It was very impressive to track the fleet on the AIS and try to guess what issues they were having.

We managed to be lucky enough to pull away from the fleet. Our aim was to win the first part of the race which ended at the tip of Japan. It was something to realize that I was so close to Japan a place that is so far from home (Montreal, Canada). I did take a moment to reflect and think about how lucky I am to be living this dream of sailing around the world and how far we’ve travelled so far. 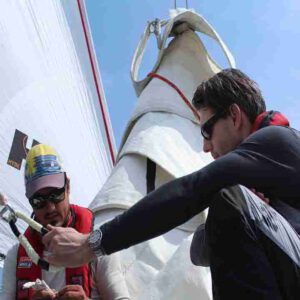 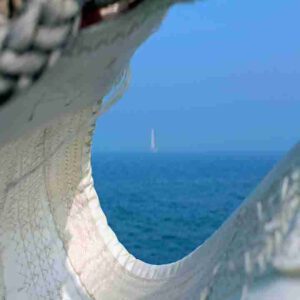 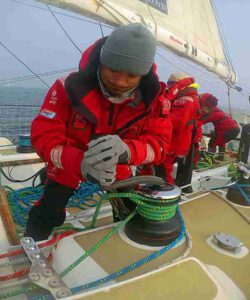 The weather did not look favourable in front of us with another wind hole anticipated. And wind hole we got. We literally went from 10 knots to 2 knots in minutes and could not do anything but watch all the other boats catch up. Onboard the atmosphere became a bit rough. We tend to forget every time. One of my moto’s for those situations is: Never too high, never too low. Which means, when you are leading never take anything for granted, keep pushing. When you are behind, never lose faith and hope, keep pushing. How many times have we seen leaders crumble in the final stretch to a race so far? It won’t be the first nor the last time. It is also good to remind us that a lot of luck is needed in wind holes. You can be 200m from another boat and yet they are moving twice as fast. At the end of the day we all agreed to take this as a new start for the race. Let’s build on what we have done well to put us in the lead up to Japan and improve on what we identified as our weaknesses. We then turned our focus on the next gate about 400nm away.

As we sailed north, the weather forecasted a transition to upwind sailing with 20-30knts of wind. That meant we would go back to living at 45 degrees on board with the boat crashing through the waves.

The shift occurred during our 4am to 8am shift. Our watch was on and we literally went through all possible evolutions in one watch. Spinnaker drop, Yankee hoist, reef in, headsail change. For many of the new leggers it was their first time performing those evolutions since training many, many months ago. I must say I am so proud of my guys. They were fantastic and responded so well to our instructions and feedback which helped us pull away and make our way to the front of the pack again. I love our new leggers. They are so committed, eager to learn and push out of their comfort zone. There is something special about them which gives me hope for a very good result. We spent hours preparing for rougher weather and using the whiteboard to go over manoeuvres and ‘what if’ scenarios. Everyone was so attentive and showed a great amount of interest which made such a difference in putting it into action. I’m getting more used to sharing my acquired knowledge or leading discussions about sailing. Some call it teaching, but Nikki is the teacher, I’m a sharer. I take what I’ve learned and spread it out in the hope of someone else learning.

Unfortunately for me that rough weather coincides with my cook duties. I was to be the cook for all day and let’s just say my body and my mind were on two different tacks. I quickly felt sea sick spending time down below at 45degrees and to make a few trips outside to have a private talk with Poseidon and share my lunch with him. Fortunately, some of my teammates not suffering with seasickness stepped in to support me. As Toni said : “Simon, I can’t monkey up the mast, hoist a sail by myself, lead a team to a headsail change on the bow or hang by my feet on the side of the boat to take off some seaweeds to help us go faster, BUT if I can help you through this painful day you are having and this makes you more available for the rest, then I feel I am contributing”. Bless her! She is a saint. I’ll trade monkeying any day for cook duties in heavy seas. I really belong on deck.

The daily conditions influenced the question of the day during our daily meeting: What helps you survive the 45 degrees lifestyle? Some said it was it idea that it will pass, it always does. Some said it was moving slow and safe. For me: kneepads, helmet and a bucket! Kneepads and helmets to move around crawling on the walls and figuring out how to hold myself still on the toilet and the bucket to share my previous lunch with Poseidon.

After a night of sleep and being back on deck the next morning, I already feel better.