Remember when I told you we needed to keep pushing and focus on creating memories. Well the third week of the Pacific will be one to remember.

It all started by us taking over GREAT Britain… yeah we aren’t last anymore.

As we approached the 45 degrees of latitude, the weather conditions slowly built up to cold, wet and windy.

We experienced our first real crash gybe which left some damage and added another weight on our shoulders. Luckily nobody got injured and the damages were minor.

We were slowly gaining miles on Liverpool 2018 and Nasdaq which really started to build our hopes.

Then it happened. Something people will remember as The Perfect Storm. We experienced weather conditions that even some of the skippers had never experienced before. 15-20 metre waves classified as phenomenal. Winds from 35 to 60 knots constant for many days in a row. Gusts of 90 to 110 knots. I kid you not, the conditions were terrifying. But oh god did I enjoy it. Hahaha. The adrenaline rush and the intensity of the sailing those days were things I shall never forget. We had to restrict the helms to our best for obvious safety reason and I was proud to be one of them. Some teammates even came to me after and told me that to their surprise they never felt in danger or scared because of the control and composer I showed at helm.

Kind words that I shall keep in mind and remember if I ever doubt myself or feel sad. hehe.

These conditions allowed me to push the limit of our boat further than anyone had done before. Despite not being a fan a sharing top speed records (because the only thing that matters to me is how many total miles you do in the right direction during your set), I must confess I was pretty proud of the ones I achieved. Previous record was 22.7knts and I managed to break it not once, not twice but four times in a session bringing the speed indicator to 23, 24, 25.6 and finally 26 knots. People were going crazy. It was exhilarating to surf on the edge of control. Managed to hit the 20s many times in that session as well. 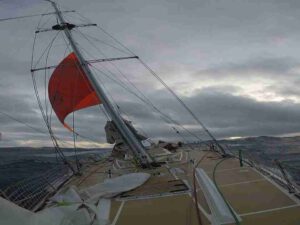 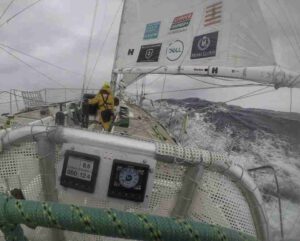 Unfortunately, the conditions had to catch up to us one day or another. A day earlier during a reefing manoeuvre, we had damaged some sliders of our main sail and the mast track. I had to climb the mast in 35 knots of wind to secure the reminder as a temporary fix. But those fixes did not hold the 92 gust of wind that came in at the end of my shift. Despite a small round up, I managed to keep control of the boat and bring it back on course after a few seconds. But to our regret, the repairs had not held and the mainsail was damaged. Well the repair did hold, it’s the main that ripped. It was heart breaking. We urgently drop the main in order to prevent further damage and set up the emergency tri-sail. With the wind blowing 45-50 knots. None of us was to go up the mast that day.

With the weather forecast showing signs of decrease the coming days and the winds decreased to 30s knots, Nikki led the work to be done the next day. I ended up spending over 5hrs up the mast with my best friend Jerome. The funny part is that we had never spent that much time together as we are always on opposite watches. But the conditions were still rough and with the boat achieving speeds close to 20 knots and the waves bouncing us from side to side we spent sixty percent of our time holding on for our life and the rest actually fixing the mast track.

We didn’t manage to finish the work before dark which was a worry as the conditions were supposed to get worse but also a windhole was starting to form just a few days away and we would risk landing in it. After a quick bite, Jerome and I climbed back on the mast. Jerome went up first. When I arrived, I noticed that the conditions had worsened, we were swinging and moving around much more than earlier during daylight. It was going to be a tough one. After about an hour of trying to get the work moving our progress wasn’t good. This was due to the fact we spent eighty percent of our time holding on for ourselves or the other to prevent losing control and being swing around the mast or against it. We exchanged a few looks that said it all. We were also very careful not to drop any pieces and break anything that would shatter our hopes.

Finally, Jerome turned and looked at me: “Simon, I don’t think I can do it”. My response was clear: “I’m holding on just because I don’t want to leave you alone here, but I don’t feel it either”. We agreed that the risk of breaking tools, losing a piece of even getting injured was too high, we had to come down. Jerome made the courageous call to Nikki to announce our defeat. We proceed to get down the mast. We knew the risks of not completing the work. Jerome and I probably spent half hour in the saloon just contemplating our defeat. It was hard to take. Although we knew we had made the right decision (which was confirmed the next day when Jerome struggled to finish the work in the daylight), we had that feeling of guilt and the feeling of having let the whole team down when their hopes were in our hands. Jerome and I are usually the tough ones onboard. You can throw anything at us, we will just get along with it. But not that time. It was a pretty sad picture of two defeated men, eyes full of water. Nikki later came down to offer her support and comfort us.

We may have lost a few hours, but that’s it. Everything was sorted the next morning and most importantly, no one got injured. We were back in full strength early morning that day.

Another special moment during that week was the crossing of the international date line. We were to relive the same day (date) twice. It inspired a question for our daily meeting: If you had one day to relive which one would it be?

My answer: July 22nd, 2018. The day I got married. Yup, I got married four weeks before leaving for a round the world race lasting eleven months. It’s a bit more complicated than that, but if you would meet her, you would understand why I could not wait. That day was the absolute perfect day. Perfect and happy wife, filled with the people we love with the perfect weather. It’s a day I will cherish forever. Whenever I’m going through a rough time or pain on this journey, I think back of that day and it makes everything easier.

Another answer that I loved, which was a bit more philosophical was: Tomorrow… because you can make it any day you want.

So, which day would YOU relive and why?

And what are you doing tomorrow?

Talk soon for the finish of the hardest race so far.