CLIPPER RACE BLOG 19: Spectacular – no other word for it!

Could not find any other word to describe this Transatlantic Crossing. From start to finish the race has been absolutely spectacular.

New York was an absolute delight. I was lucky enough to have my wife and family over for a couple of days which always brings a boost of energy. Energy I definitely needed for the upcoming final leg of this round the world journey.

The departure ceremony was amazing with the boats parading in front of Manhattan and the Statue of Liberty. The best part for me was this was the last time I’d have to say goodbye to my love one. Next time I’d see them would be upon our finish in Liverpool. Being away from family and friends has definitely been one of the challenges of this adventure and I look forward to reunite with them and share everything I’ve experienced and learned throughout this epic journey.

Seems like this race was just meant to be special. As we launched the Le Mans start just outside the traffic separation scheme we soon realized that despite having left the spectators on the shore side we would have another type of spectator to send us away. About 20 whales (humpback I think) gave us quite the show as we launched this transatlantic crossing. Simply breathtaking!! In fact, unexpectedly this was one of the crossing where we saw the most sealife; humpback whales, pilot whales, dolphins. 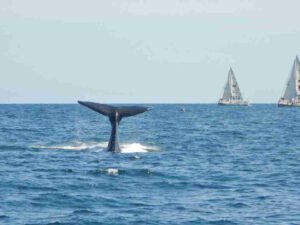 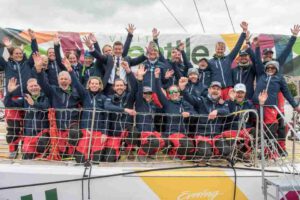 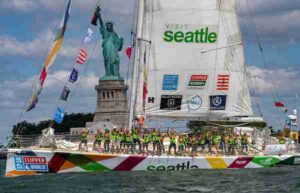 Once in the race, the strategies soon split the fleet. A group went north and followed the ice exclusion zone (the beach), some went far south to go after the gulf stream currents. With PSP Logistics playing its joker card (doubling their race points), and the overall rankings, we kept a close eye to them and Qingdaoas they are looking to close the gap behind us.

Luckily, the weather never got that cold… well it was cold, but I just expected cooler. Throughout the race we experienced the whole range of conditions; upwind, downwind, strong winds, lighter winds, it was a very complete race.You have probably figured out by now that I LOVE to compete and my favourite races are the ones we battle head to head and this one was one of those. I really felt in my element. We fought with Nasdaq and Liverpool 2018earlier on in the race and finish with battles against Unicef and Garmin.

What I liked the most out of this race is that I was able to support Nikki and get involve in the strategy of the race. We had lots of exchanges about it and analysed many scenarios. On deck, things were just flowing nicely. The new leggers were motivated, curious and showed a desire to learn and excel rarely seen before.

Of course, we had ups and downs throughout the race. I remember when we had to decide to go to the scoring gate or not, opinions deferred strongly and everyone had their input. At the end of the day, it seems like the wind answered that question for us. Little later we were battling hard to try to pass Unicef to the get but just could not keep up with them. They were so fast and doing everything right. Frustration and tension built up onboard and we started committing a bit more mistakes, which costs us a spinnaker which our amazing sail repair team managed to repair after 36 hours of hard labour. But soon we realized that despite all that, we were still in a very good place in the rankings; 2nd. We needed to change things around and get back to a more positive and constructive environment which we did.

With the risk of getting caught up by a high pressure front coming from behind as we approached Ireland, we kept pushing until the end. We managed to pass Unicef in the final days of the race and barely made it to the finish line when the wind dropped and the tide became quite the challenge.

With this third win behind our belt, many started saying we like to choose where we win because the welcome we received in Derry-Londonderry was absolutely fantastic with hundreds of people along the shore waiting for us.

With this amazing results we are now sitting in 2nd place overall, tied with Qingdaoand have close the gap with Sanya Serenity Coast.With our joker (doubling race points) still to play on the final race from Derry-Londonderry to Liverpool, everything is possible and no matter what the final result is we will have achieve something remarkable.

Looking forward to tell you all about it in my next blog.