Over 40 000 nautical miles later, I am here sitting on the dock in Liverpool where it all began 11 months ago surrounded by my wife and family and the many friends I have made throughout this amazing adventure.

I must say this adventure challenged me from the very first day until the very last. The final race from Derry-Londonderry to Liverpool has proven to be a fantastic sailing challenge. No other race has had that many lead changes and with still a lot at stake for the overall ranking the pressure was on. But we did it! We finished with a strong 5th place to secure our overall 2nd place. 2nd place!! That’s AMAZING! What an accomplishment. What a celebration. 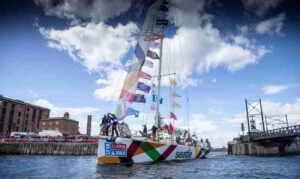 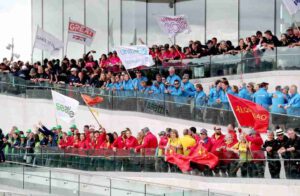 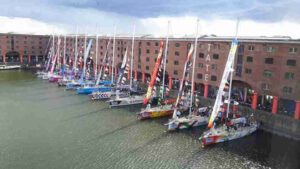 I can hardly describe how I am feeling right now, everything seems unreal. This is it! The race of my life is over. Well, is it really over? Or is it just a milestone until the next big thing? What’s next? That’s probably one of the question I’ve been asked the most. I mean REALLY? I just sailed around the world, I’m exhausted, I’m broken, I’m broke… what’s next? SLEEPING! SLEEPING IS NEXT. Sleeping in a normal bed that doesn’t leak or heel, for nights that should last more than three hours. Going to the toilet without kneepads and helmet to protect myself from being smashed against the walls. A toilet that is flat and doesn’t move. Having a normal diet filled with fresh fruits and vegetables. Having more than 2-3 sets of clothes. Being able to shower; shower with hot water.

These will remain anecdotes and the memories that I have made will last forever: our three wins, the perfect storms in the north pacific with winds of 110 knots and 20-meter waves, the famous Sydney-Hobart race start and arrival, the times Nikki gave me the helm for the race starts and in-port races.

Am I a better sailor: absolutely

Am I a better leader: definitely

Am I a better man: hopefully

Now let’s reverse the roles. What’s YOUR next mission? Time to write and share YOUR story.

CLIPPER RACE BLOG 19: Spectacular – no other word for it!