Marlow Ropes were delighted to see many of our RYA British Sailing Team ambassadors and past award winners secure medals and great results in the final days at the Miami World Cup. Four more medals including three golds secured on the final day to brought the squads’ final tally to five.

Rio 2016 gold medallist dominated the action on his return to major competition to win the Finn class on Sunday (28 January), Luke Patience and Chris Grube took the top spot in the men’s 470 and Alison Young was victorious in the Laser Radial.

Two-time world champion and current European champion Nick Thompson rounded off the medal haul with bronze in the Laser fleet.

Dylan Fletcher and Stuart Bithell had kicked off the team’s success with a win in the 49er fleet on the penultimate day of racing which saw them defending their World Cup Series Miami title following a dramatic medal race in breezy conditions. 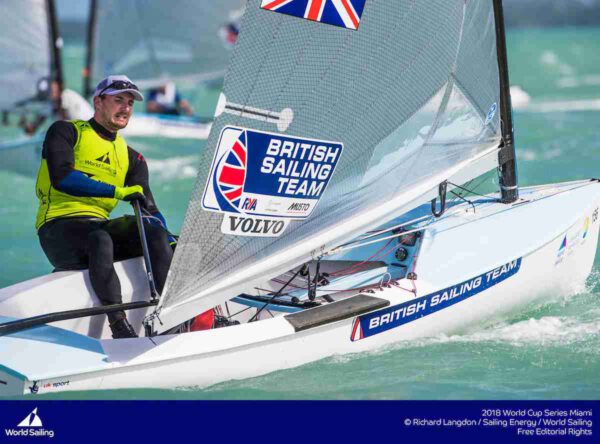 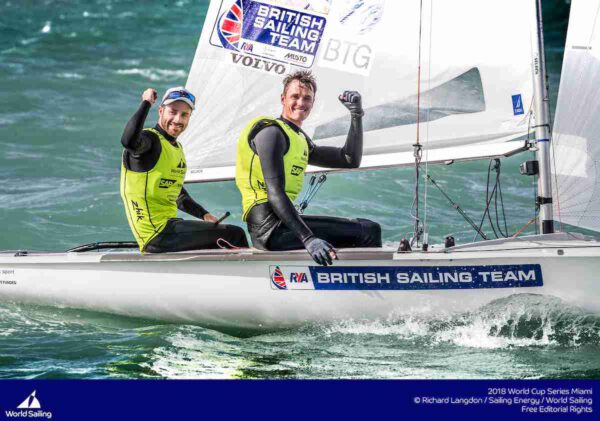 The pair, the current 49er world and European champions, got their 2018 campaign off to a flying start with victory at the regatta, the second of four World Cup dates in the run-up to the year’s main event, the Hempel Sailing World Championships. Despite leading the fleet by three points going into Saturday’s double-points medal race, competition was so tight at the top that a podium place far from guaranteed.

Spaniards Diego Botín le Chever and Iago López Marra, Fletcher and Bithell’s main threat for gold, got the better start and led the ten-boat fleet round the course at speeds of more than 20 knots as a fresh breeze blew through Biscayne Bay. As the race reached its climax, Fletcher and Bithell found themselves in third place behind the Spanish crew and Austrian crew Benjamin Bildstein and David Hussl.

Had the race finished in that order the British pair would have had to settle for silver – but on crossing the line they found out that the Austrians had been over the line at the start, handing them maximum points. That put Fletcher and Bithell ahead by just a single point – and meant they retained the title they won at the 2017 event.

“It was wicked fun out there – sunshine, big breeze, flat water… What more could you ask for?” a beaming Fletcher said after returning to shore victorious. “We didn’t actually know we’d won until our coach came up to us at the end of the race and told us. We had our suspicions that the Austrians were over at the start but we knew we had to race them hard right until the end.”

The win gives Fletcher and Bithell the perfect start to the year following on from a successful 2017 that saw them win the 49 world and European championships and numerous other medals.

“We’d not done too much sailing in the build-up to Miami so we came here without any big expectations, but we worked really hard in training and came out and delivered,” added Bithell, a silver medallist in the 470 class at London 2012.

It is a timely boost for the British Sailing Team as it gears up to the biggest test of the year – the Hempel Sailing World Championships in Aarhus, Denmark, this summer, the first opportunity for Olympic qualification.

Scott, who took a break from Finn racing after the Olympics to sail with Sir Ben Ainslie in the America’s Cup, went into the double-points medal race with a comfortable 19-point lead having only finished outside of the podium places twice in nine fleet races. He sealed victory in style with a win in the medal race, announcing his return to the Olympic circuit in no uncertain terms.

“It’s my first proper regatta after the Olympics and it’s nice to be back,” Scott said. “It’s great to jump back in the boat and still be racing well. We normally expect 5-6 knots in Miami but we’ve had some real top end stuff. It’s been a great week for everyone.”

In the men’s 470 Patience and Grube also had a commanding lead going into the medal race, and secured victory by finishing second.

“We came here looking to measure where we are in the fleet and work out what we need to do to win the world championships,” said Patience, who won a silver at London 2012 alongside Bithell. “But we’ve sailed out of our skin, gone really fast, raced smart and well, and we’re really happy to have won. We took a year off after the Rio Games so it’s nice to ramp up the energy again. We’re buzzing right now, filled with energy to work hard.”

The third leg of Sailing’s 2018 World Cup Series will be held in Hyères, France, in April and we look forward to seeing much more from the talented British team.