Racing began on Saturday morning in near perfect conditions of 12-14 knots from the west with the round robin preliminaries dominated by Owen and Scotland’s Ali Morrish. Both skippers were undefeated through five races when the pair met. Something eventually had to give, and it was Owen who took the initiative with a win over her rival. 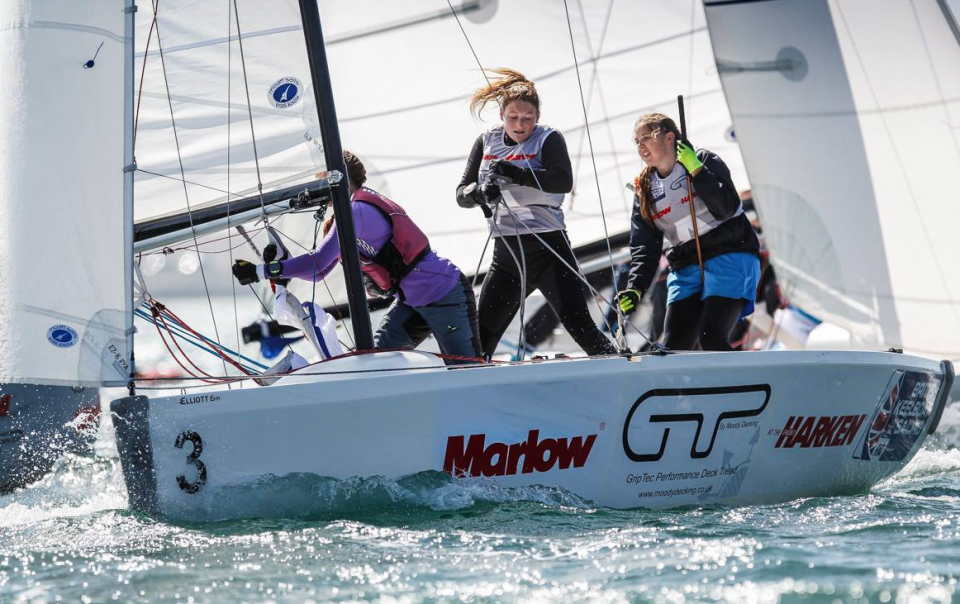 The second round robin saw Sophie Taylor, sailing with two crew she had only met the day before, and Rhiannon Massey taking consecutive wins. The final races of the second round robin were contested in 16 knots of breeze from the west and glorious sunshine. Morrish continued her winning ways going undefeated and taking top spot in the semi-finals. Taylor and Massey had dented Owen’s scorecard, but not enough to take the top spot. Massey’s stellar performance in the second round robin secured her berth in the semis with Taylor taking the last space by just one point ahead of Abby West and her team from Loughborough.

The semi-finals saw Morrish and Massey taking the win over former team mate Owen. But Morrish and Owen levelled their matches before taking the decisive win to progress to the final.

In the final it was Owen who drew with a comfortable win, but an uncharacteristic mistake in race two led to a penalty which Morrish took advantage of to draw level. Owen took the third race with a thrilling overtake down the final run which left Morrish with a must win race to stay in contention.  At the start of the second beat Morrish felt she had enough space to take her penalty and stay in the lead. Her gamble had paid off and Morrish looked set to level the series until a cruel twist of fate saw her spinnaker jump out of its bag diving in to the waters of Portland harbour and bringing her boat to an abrupt halt which meant that Owen and her West Kirby team sailed past taking the title of 2018 Marlow Ropes Women’s Match Racing champions.

We are thrilled to have been a part of the Womens Match Championships again this year and being the title sponsor. We are delighted that we got to put our name on this.