This international Women’s Day, Marlow Ropes is celebrating the success of the many inspirational women in sailing around the world that it is proud to work with and support as official supplier.  These include: 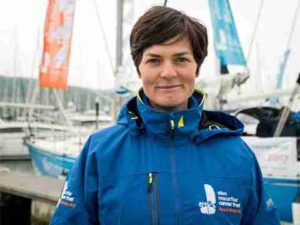 The long relationship between Marlow Ropes and Dame Ellen Macarthur started more than 17 years ago, and continues to this day. During this time Marlow has supplied the running rigging for all of Ellen’s numerous voyages and record achievements, including her record breaking entry in the 2000-2001 Vendee Globe, the solo around the world race that Ellen completed in 94 days and is still the world record for a single-handed, non-stop, monohull circumnavigation by a woman. 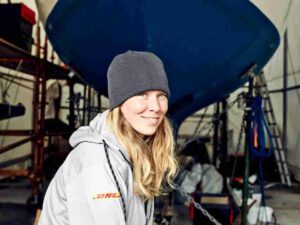 This year Marlow have been delighted to work with pioneering GB yachtswoman Susie Goodall who will compete in the solo and unsupported non-stop Golden Globe Race that starts this July. This will mark the return of this iconic race with Susie following in the footsteps of Sir Robin Knox-Johnston who won the Race back in 1968.  Marlow are providing all the polyester running rigging for Susie’s Rustler 36 boat ‘Starlight’.

“There’s a mutual understanding that we’re all just sailors and gender doesn’t come into it and this is thanks to the incredible female sailors such as Tracy Edwards and Ellen Macarthur who paved the way for us.” Susie Goodall 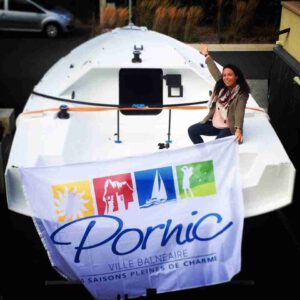 French engineering student Marie Gendron (aged 18) has been working on an inspirational project to design and engineer her ground-breaking boat, Le Mini 930, a 6.3m Mini Transat; whilst preparing to sail it solo across the Atlantic in 2019. Marie has rigged her boat using Marlow’s DM20 product and will be publishing a case study on this.

“In two weeks, I found a mould for the hull, architectural plans and some personal finance to launch the construction. I knew very well that this category of sailboat that I was starting to build was part of a category where we could run races and even make a transatlantic, but at the time, building my own boat was more important to me. At the age of 18 I was dealing with sponsors, managing a team (mostly boys), talking to associations and building the boat. In just one year I felt as if i’d aged another three years!” Marie Gendron

Laser Radial sailor Clementine Thompson was the recipient of Marlow’s British Sailing Team Podium Pathway Award in July 2017 at the age of 20 and has been a keen talent to follow ahead of the Tokyo 2020 campaign.  Clementine has been working with Marlow along with other members of the British Sailing Team, to test new products and provide application knowledge for the Excel Dinghy range, including the new Excel R8.  Clementine’s relationship with Marlow follows along line of high achieving women athletes in the British Sailing Team.  These include World Champion Laser Radial athlete Alison Young, 470 Rio gold medallists Hannah Mills & Rachel Larman, Hannah Stodel who, with John Robertson is the former World Champion Sona and Megan Pascoe, Former World Champion 2.4mR

Steph Roble and Maggie Shea combine to make a formidable 49erFX team, rigged by Marlow,  with notable success in their careers to date.  In 2014, Steph won the US Sailing Rolex Yachtswoman of the Year Award and in 2016, Maggie crewed for Sally Barkow on Team Magenta 32, the first-ever all-women’s team to compete on the World Match Racing Tour. Both have achieved great success in the Women’s Match Racing Championships and there is little doubt that this team will fly high ahead of their Tokyo 2020 campaign.

It is also fitting that in advance of this year’s International Women’s Day, Marlow Rope is also set to announce a sponsorship of the RYA Women’s Match Racing Championships.

“Marlow have been privileged to work with a succession of talented female sailors and athletes over the years, and this International Women’s Day we want to pay homage to their ambition and achievements.  We are delighted to work with these inspirational women who demonstrate the skill, determination and tenacity required to sail at the very top of the sport.  They are all a real force of nature and we look forward to seeing where their ambition takes them next.” Emma Donovan, Marketing Manager