Britain’s Marlow-rigged 49er sailors proved a dominant force at the World Cup Gamagori, which drew to a close on Sunday (22 October).

The regatta – the first in the 2018 World Cup Series – yielded a British 1-2 in the men’s skiff class, with World and European Marlow-rigged Champions Dylan Fletcher-Stuart Bithell claiming the regatta victory on Saturday’s first medal race day.

The duo have now won their past three events in a row, seeing off a strong challenge from teammates and eventual silver medallists James Peters-Fynn Sterritt, while Laser talent Lorenzo Chiavarini narrowly missed out on the podium spots on Sunday’s weather-affected final day of racing at the Japanese venue.

Fletcher-Bithell had taken a five point lead over their British stablemates into the three-race finale for the 49er fleet, with the two teams battling it out for top honours right through until the final run of the final race.

Peters-Sterritt, who won silver at both the Worlds and Europeans, cranked up the pressure early on, with a win in the first race of three narrowing the gap.

But Fletcher-Bithell turned the tables in the second to set up a final race showdown for gold.

“We were both guaranteed silver going into the last race,” Fletcher explained. “We chose to match race them to put us as far as possible down the fleet to ensure we would beat them because we were ahead on points. “It was going smoothly until we made a mistake, at the bottom, and they wiggled free.”

Peters-Sterritt managed to get ahead and at one stage had almost enough boats between themselves and their teammates to be in gold medal position before a pile-up at the finish ended any title hopes.

“We thought we had to overtake one more boat to beat Dylan and Stuart overall,” Peters explained.

“We were trying to overtake but the French boat didn’t give us enough room at the finish and ultimately, we were rafting against the committee boat. It was a bit of an unfortunate way to end the last race.” 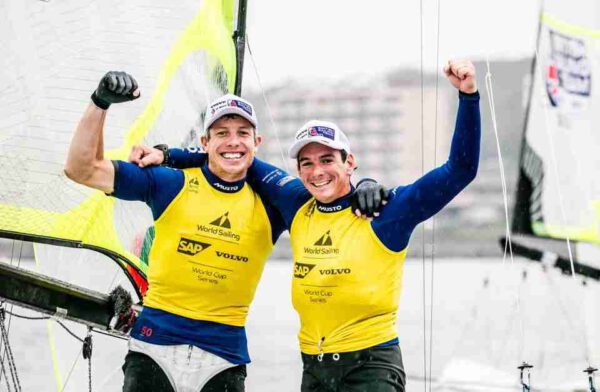 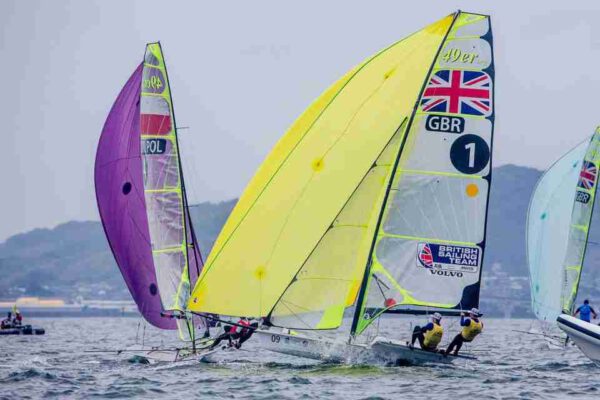 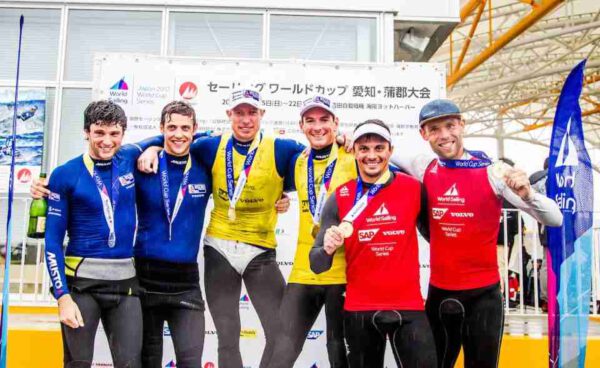 Marlow Award winners and Ambassadors Fletcher and Bithell sailed back past their teammates to finish sixth in the final race, ahead of Peters-Sterritt in eighth, and secure gold by six points.

“It’s been a fantastic year.  We started sailing together a year ago and it’s gone from strength to strength,” said Fletcher.  “We’ve medalled at all the major events, and we’ve won the last three on the trot.  At the moment we’re in our little purple streak and hopefully we can dominate like the Kiwis did and beat them when they come back.”

“We have all been working very hard and it’s nice to see that it’s paying off with the Worlds, Europeans and the Gamagori World Cup Series, we have been doing really well,” added Bithell of the strong British 49er squad performance this season.

Sterritt said he and Peters could be happy with their silver.

“We were saying on the sail in, to be in a position where you’re battling for gold and silver is a good place to be.  Obviously it didn’t quite go our way today, but we’re happy with a silver and we gave it a good go out there.  Congratulations to Dylan and Stu.”

The eighteen British Sailing Team athletes to compete at the World Cup Gamagori will now make their way to the 2020 Olympic Games venue for Enoshima Olympic Week (27-29 October), where they’ll be joined by Finn sailors Ben Cornish and Giles Scott, who will be racing in his first Finn regatta since claiming gold in Rio. We wish them the very best of luck.