Marlow Ropes are proud to have worked with Unusual Rigging on a project to elevate a 5.5 ton star at a hotel in the Middle-East.

Noor Riyadh is a new, citywide annual festival of light, which showcases artists from all over the world. ‘Star in Motion’ by renowned lighting designer Koert Vermeulen, is a powerful focal point in the middle of the city of Riyadh, Saudi Arabia – a shining star, suspended from the top of the famous Kingdom Tower more than 300m in the air.

The UK based rope manufacturer produced all the heavy-duty bracketry and Dyneema® ropes which hold the star in place.

Adam Sutton, Unusual’s Rigging Project Manager said: “Once out in Riyadh and work on the project began, the team began work installing the star. Weighing in at 5.5 tons, it was temporarily lifted on 6 off 2 ton Liftket electric chain hoists. It was then transferred onto its permanent suspension points – 4 off – Dyneema Rope (80mm in diameter). These ropes have a break strength of 490 ton each. The cables needed to be this large due to the wind load on the star and the wind tunnel effect of the building. “We then had to tension the star down to stop it swaying in the wind,” explained Adam. This was done on an additional 2 off – Dyneema Rope (80mm in diameter) connected to 2 off – 16:1 Tirfor assemblies, giving us a total of 50ton in tension to stop the star from swaying in the wind.” 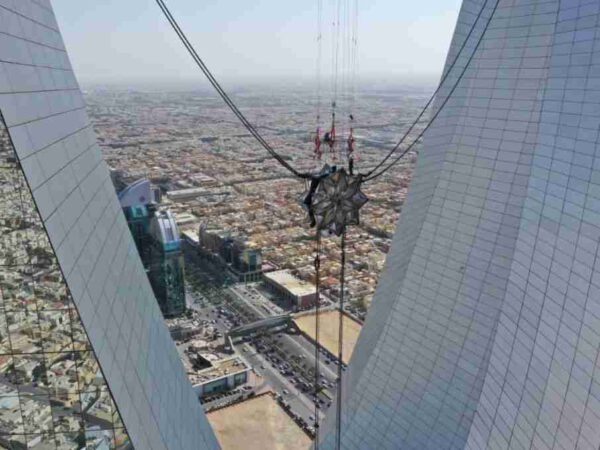 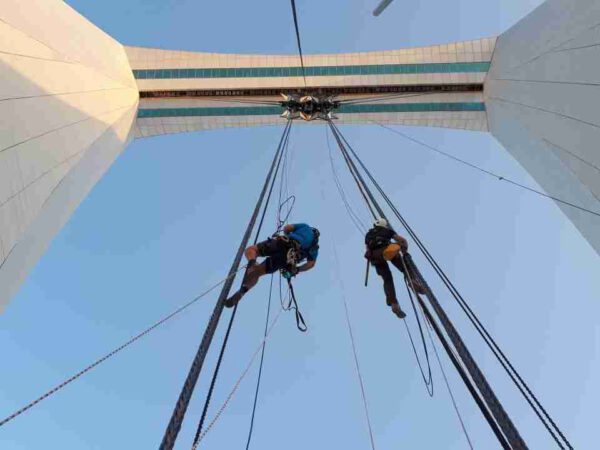 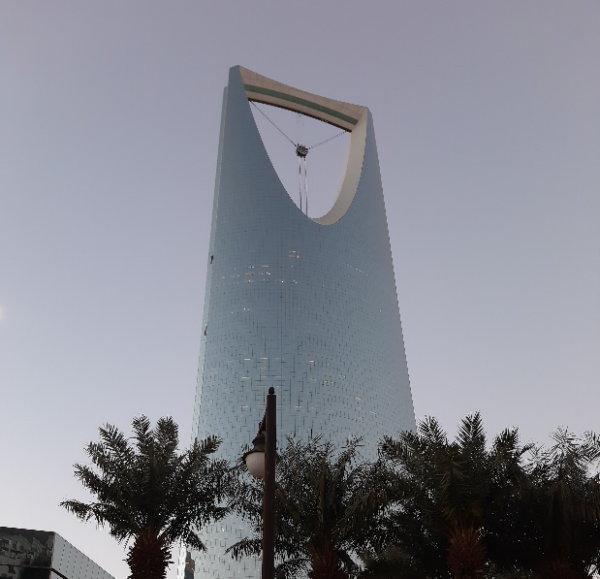 At Unusual Rigging, Health and Safety is always the first consideration on any project and this one was no exception. “Even before thinking about having to work at 300m and the complications that comes with that, we first needed to consider how to transport equipment weighting several tons up two flights of stairs. One case alone contained two ‘I’ beams that weighed in at a sizeable 750kg each. This was one of the biggest concerns – not having had the opportunity to carry out a site visit, it was a challenge to produce the safest method of work before arriving on site.” He continued: “Once we had managed to get all our equipment to the work area, we then started building a working platform to ensure that all crew had a safe stable place from which to work. For the health and safety of both the crew and the members of the public below, the platform was constructed with a double height handrail and debris netting. As the star was build the weather and the wind speeds were constantly monitored and appropriate action taken if needed.”

‘Star in Motion’, which took four weeks to load in, will be taken down in two weeks in mid-April once the festival comes to an end. This will involve reinstating the working platform which was removed after load in so that it didn’t affect the appearance of the piece.