Marlow has provided more than half a kilometer of high performance yachting rope to rig the Gibsea 44 performance yacht, “Moonspray”. The boat will set sail on the 2,400-mile relay on 20th May.

Marlow MD Jon Mitchell said: “We are delighted to be linking up with Ellen’s fantastic charity again The Trust does amazing work and we are always keen to support young sailors – especially these young sailors who have shown such resilience.”

Round Britain 2017, an initiative set up by the Trust, celebrates achievement and potenti>al. The 100 youngsters taking part in this water-based relay have all sailed with the Trust following treatment for cancer. Up to  five will join the voyage at each leg of its journey, with many sailing in or out of their home areas. 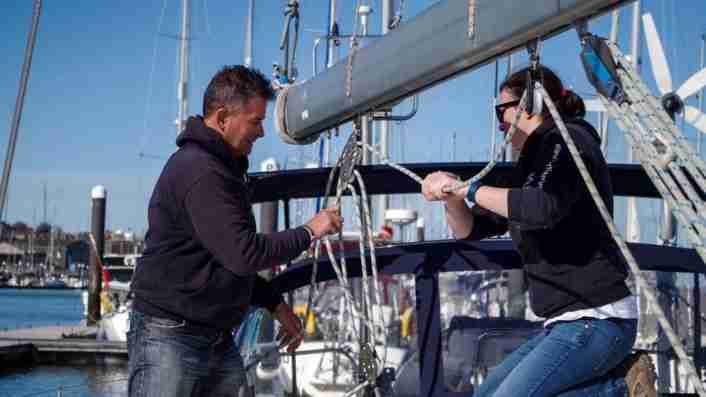 Dame Ellen Macarthur said: “The Trust aims to rebuild young people’s confidence through positive, shared experiences. The welcomes to the crew, wherever we are in the UK will be a huge part of this experience. We would love everyone to be part of the adventure and get involved, every individual moment, throughout the UK will make a difference.”

The voyage’s four skippers and medics have sailed with the Trust for many years. Hannah Spencer, Mate and Tom Roberts, On Board Reporter were themselves both introduced to sailing through the Trust during their recovery from cancer.

The relay will cover over 60 different coastal towns and cities every week from May to September.

The long relationship between Marlow Ropes and Dame Ellen Macarthur started more the 17 years ago, and continues to this day. During this time Marlow has supplied the running rigging for all of Ellen’s numerous voyages and record achievements, including her record breaking entry in the 200- -2001 Vendee Globe, the solo around the world race that Ellen completed in 94 days and is still is the world record for a single-handed, non-stop, monohull circumnavigation by a woman.

MacArthur’s second place in the 2000–2001 edition of the Vendée Globe, with a time of 94 days, 4 hours and 25 minutes, is the world record for a single-handed, non-stop, monohull circumnavigation by a woman.