Rope Strength and How to Retain it

It is likely anyone who has ever used ropes has learned to tie knots – to create eyes, connect rope to objects or even just for decoration. There’s a knot for every application and for many applications there is no better solution than a knot. Nonetheless it is important to be aware of the limitations of knots.

Every time a rope is distorted strength is lost.  When a rope is bent around itself or an object, some of the strength quoted by the manufacturer is lost.   A bent rope means some of the fibres on the outside of the curve will have to carry more load while fibres on the inside may take none of the load.  In addition, parts of the rope in a knot may be compressed and the fibres unable to move to share load.  These factors and more combine to give a complex mechanical system that ultimately reduces a rope’s strength.

The level of strength reduction can be substantial. In some cases, strength can be reduced by over 50 per cent. However, this will depend on many factors, including the type of knot, how the knot is tied, how neat it is, how the rope is loaded, the design of the rope and so on.

For these reasons Marlow likes to keep things simple with the following guidelines: 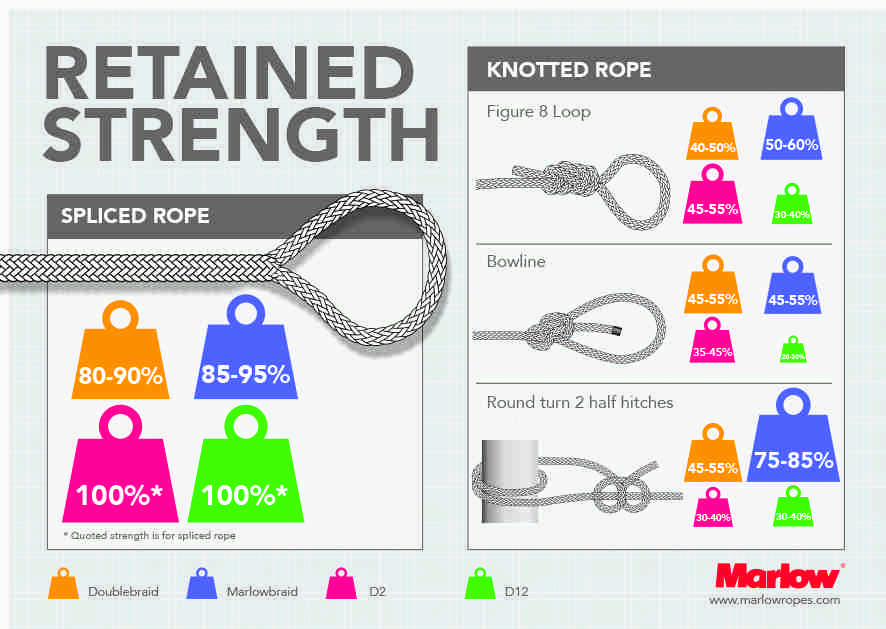 In contrast to these figures, a well spliced rope will typically retain 90 percent of its quoted strength.  In fact, some ropes (typically HMPE products) are often quoted with spliced strength, as this is how the product is tested. If strength of termination is critical then a splice is always the preferred choice.

There is much healthy debate about what knots work best for any application and which knot is strongest. Tying knots is a skill, it needs to be practiced!  There are numerous examples of accidents and injuries caused when an incorrectly tied knot behaves unexpectedly.  It’s better to know a few simple multipurpose knots that can be reliably tied every time than to try and use the ‘best’ exotic knot but make an error in tying it.

The following ‘Magnificent Seven’ knots can be used to solve almost any rope problem.  Notice some of the same knots can be used for many different applications.  If you only learn one knot, learn a figure 8 and how to use its many variations.

Marlow Ropes is a trailblazer in the technical development of leisure marine ropes from dinghies to super yachts and particularly service high-speed sailing with its Marlow Grand Prix (MGP) range. Marlow designs and produces customised ropes and rigging for any number of fantastic applications including being the technical supplier to two of this year’s America’s Cup challengers; LandRover BAR and SoftBank Japan.

For further information about rope care, splicing and to watch our splicing tutorials click on the following links:

Stay posted for Marlow’s Guide to Knots and Splices which will be released later this year.