At Marlow Ropes we are always looking to the future with innovation and development.

However, we never forget our rich and proud heritage and whilst the name Marlow Ropes was originally used as recently as 1957, the story of the Company and the intertwined history of rope making in Hailsham goes back over 200 years.

Marlow Ropes has been making rope in Hailsham for over 200 years and has a world-renowned reputation for quality and innovation. This film shows a ‘behind the scenes’ view of how we make our high-performance rope which supplies the Leisure Marine, Rope Access, Defence, Arboriculture and Industrial markets. 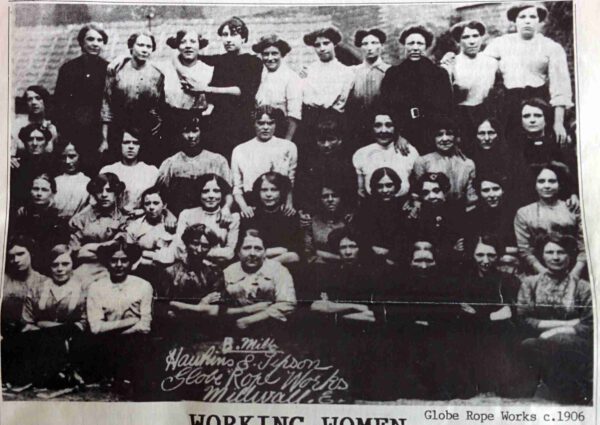 In 1807 Thomas Burfield founded his rope company in Hailsham, East Sussex – the present-day Marlow factory still manufactures rope on Burfield’s original site. In those days, however, Burfield made ropes from “soft” natural fibres, not only hemps imported from Europe and India but also Cannabis!

Later that century in 1881, George Hawkins and Alfred Tipson founded Hawkins and Tipson, manufacturing out of the Globe Rope Works in Millwall on the Isle of Dogs, London. Hawkins and Tipson made ropes mainly for the maritime industry from “hard” natural fibres such as manila and sisal. 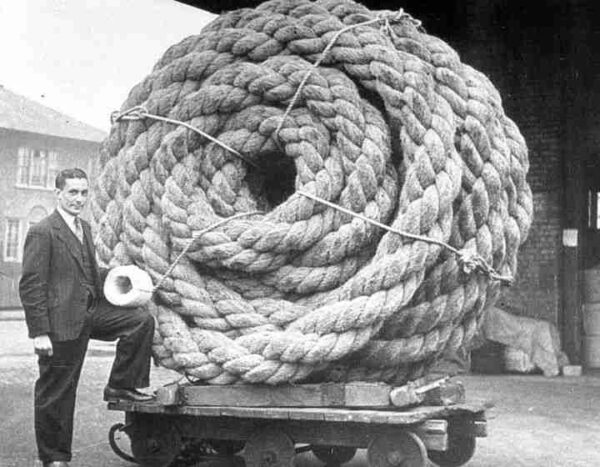 Hawkins and Tipson went from strength to strength, rapidly expanding it’s operations, thanks in part to a shortage of Manila fibre during the Spanish American war in 1898, which the Company foresaw and profited from. 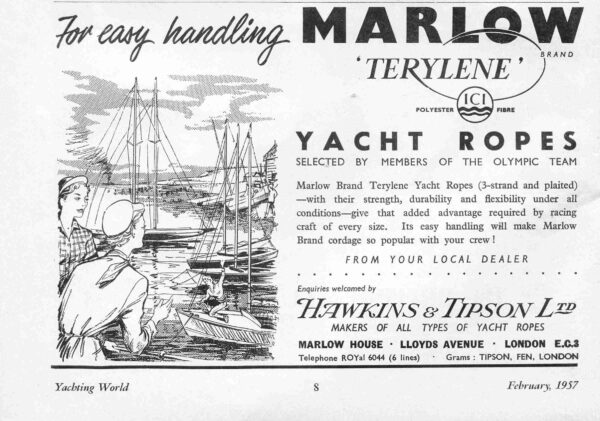 At this time rope manufacture was still dominated by natural fibres such as hemp, manila and sisal. However, by early 1950’s the “new” synthetic fibres of Nylon (polyamide) and Terylene (polyester) were becoming more widely used in industry and Hawkins and Tipson were among the first to realise their potential in rope making.

In 1957 Hawkins and Tipson started manufacturing and selling synthetic fibre ropes, made in Hailsham, to the yachting industry under the “Marlow” brand. These new nylon and polyester ropes were ideal for the demands of the re-emerging yachting industry which was just recovering after World War II. The success of the Marlow brand led to the founding of Marlow Ropes Ltd in 1961, as part of the ever expanding Hawkins and Tipson empire, with the express purpose of manufacturing synthetic fibre ropes for the yachting market. 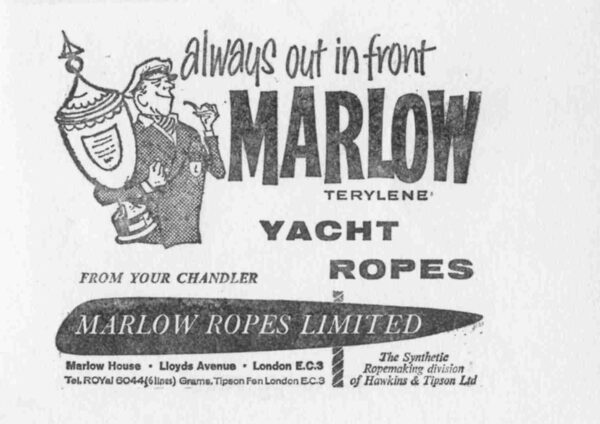 During the 1960’s Marlow Ropes very soon become internationally known in the yachting industry and leaders in the field. Yachtsmen around the world replaced their traditional 3 strand hemp ropes with braided nylon and polyester ropes manufactured by Marlow in Hailsham.

The 1970’s, saw Marlow Ropes (now the synthetic fibre arm of Hawkins and Tipson) moving from strength to strength, further asserting it’s dominance in the yachting industry with innovative products such as Marlowbraid. However, it also extended its operations into polyester ropes and slings for civil engineering projects and other general lifting work for land and marine use.

As the use of natural fibres declined in the heavy marine industry, Marlow, who also extruded their own raw materials in Hailsham, grew in it’s reach and product portfolio. They soon became the dominant company within the group and by 1983 Hawkins and Tipson (now under new ownership) was restructured, becoming known as H&T Marlow and subsequently simply Marlow Ropes Ltd.

Marlow Ropes continued to lead the way in technical innovation and together with further expansion in the 1990’s the Company re-affirmed it’s position as one of the dominant forces in rope manufacture world wide. The Marlow brand was renowned and respected in markets around the world from yachting ropes to military ropes and commercial mooring ropes to deep sea tethers for oil platforms.

By 2003, after a number of acquisitions, Marlow Ropes was a world leader in the design and manufacture of deep water tethers and mooring points for the oil industry as well as continuing to be the most globally recognised rope brand in the yachting industry. The Company was manufacturing on three sites in the UK and also in southern Germany.

At the end of 2005 however, the Company was split up and sold off to separate buyers, with the Marlow Cordage Division being bought by the owner of Marlow’s one time UK competitor, English Braids, who also retained the name Marlow Ropes Ltd.

After a period of growth which consolidated their position as the world’s premier manufacturer of performance yacht ropes, in 2013 Marlow expanded into the USA and opened a sales and distribution office in Plymouth, Massachusetts – Marlow Ropes, Inc.. Ironically, Marlow’s US office is based in the old buildings of the Plymouth Cordage Company, which until 1964 was itself one of the largest rope works in the world.

Today, Marlow Ropes continues to manufacture quality British ropes in a new factory on the same site as Thomas Burfield over 200 years ago. Times have changed however and today Marlow specialises in the design and manufacture of technically innovative rope products using the very latest hi-tech and exotic man made fibres.

One thing hasn’t changed though, Marlow Ropes’ reputation for quality and technical innovation continues in the 21st Century and the Company continues to forge a path of progress and growth in the markets in which it operates: 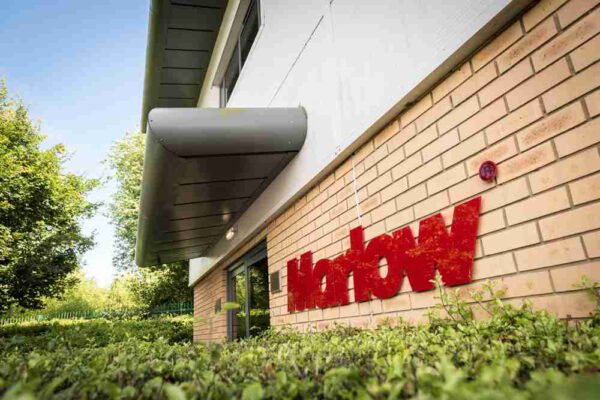 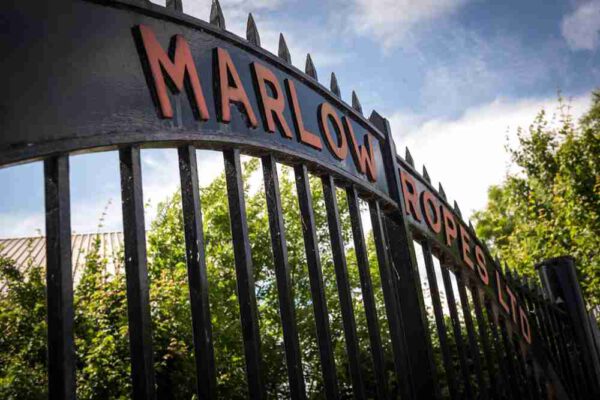 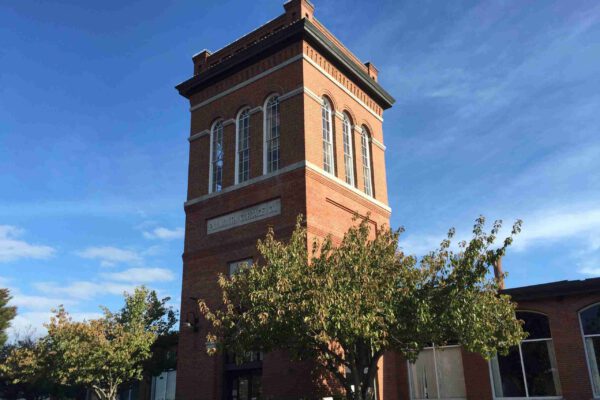